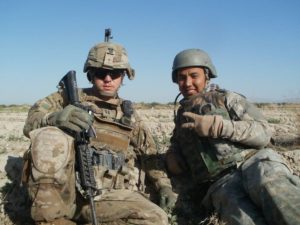 Danny Sjursen is a U.S. Army officer, strategist, and former history instructor at West Point. A native of Staten Island, he graduated West Point and served tours with reconnaissance units in both Iraq and Afghanistan.
Since his return from Iraq and Afghanistan, he has been a popular speaker, commentator, and analyst of US military policy, especially in the Middle East.
He earned his MA from the University of Kansas and is working on his PhD on Civil Rights in New York City. He has written a memoir and critical examination of the Iraq War, GHOSTRIDERS OF BAGHDAD: SOLDIERS, CIVILIANS, AND THE MYTH OF THE SURGE (2015). He lives with his wife and four sons in Fort Leavenworth, Kansas.