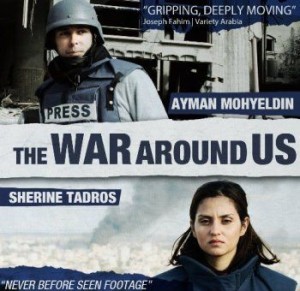 July 8 is the one-year anniversary of Operation Protective Edge, the Israeli siege on Gaza; and July 9 is the ten-year anniversary of the Palestinian civil society call for Boycott, Divestment, and Sanctions (BDS) against Israel.  The evening begins at 5:30pm with a Rally and March at Fort Wayne’s County Courthouse, featuring attorney Mark Sniderman, chair of Jewish Voice for Peace-Indiana, and speakers from other peace and justice groups.

Following the rally, we will view "The War Around Us"

THE WAR AROUND US

After the rally, at approximately 7:00pm, we gather at Plymouth Church for a viewing of the documentary, The War Around Us.  It is the true story of the only two international journalists on the ground in Gaza as Israel bombarded and invaded in 2008-2009, one of TIME’s 100 most influential people, Arab-American Ayman Mohyeldin and Arab-British Sherine Tadros reported from Gaza City throughout the devastating 22-day assault.

This award-winning film includes graphic never-before-seen footage, personal comments from both reporters not only about what they observed but also their disgust at the Western media, what Mohheldin describes as “their failure to adequately deliver to their audiences the truth of what he calls in the film “a story of great shame to humanity.” American and British news channels, he says, “neglected the story and then had the audacity to question the only journalists on the ground … they tried to spin it in a way that would marginalize or diminish what was happening.”

There’s no way to walk away from this film not feeling deeply distressed, but also with a fundamental grasp of Israel’s denial of the Palestinian’s right to life and liberty, and in Mohyeldin’s words, “the right to aspire.”