Abuna (affectionate for “Father”) Elias Chacour recently retired as Greek Melkite Archbishop of Akko, Haifa, Nazareth, and Galilee. As a Palestinian his entire village was destroyed when he was 8 years old, becoming a refugee in his own country, told in his books, Blood Brothers and We Belong to the Land (over 25 languages). 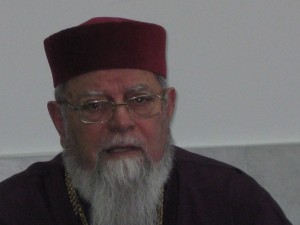 Educated at the Sorbonne (Paris), he became a priest in Ibillin, an Arab Galilee town, where in the face of Israeli government opposition over 30 years, he built one of the highest performing
K-12 schools in all Israel (3000 students, 200 faculty – Jewish, Christian, Muslim, Druze). Abuna was the first Palestinian to study Bible and Talmud at Hebrew University, and received a PhD at University of Geneva.

He has received many honors: three Nobel Peace Prize nominations, World Methodist Peace Award, French Legion of Honor, Dante Alighieri Human Rights Award, and Asia’s Niwano Peace Award (with the $200,000 prize he built the campus’ beautiful Chapel of the Sermon on the Mount. Abuna’s vision: “From the schools we want to strengthen the spirit of unity with diversity. It is vital for democratic societies to overcome the attitude and status of minority vs. majority, one tribe against another. We must begin to deal with each other as partner citizens.”

To see Elias Chacour at our Gala this September, click here.

We greatly appreciate the help that our many donors provide. Please help support our cause today with a donation of any amount. Thank you for your help and support!