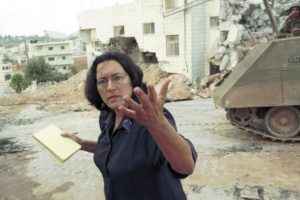 Amira Hass, acclaimed Israeli journalist, author, and columnist for the daily newspaper Ha'aretz covers Palestinian affairs in the West Bank and Gaza. She is the only Jewish reporter living in the West Bank. Hass is the only child of a Jewish mother who survived nine months in Bergen-Belsen concentration camp, and a Jewish father who survived three wartime years in a ghetto. She writes and speaks about the dilemmas of an Israeli journalist covering Israeli colonialism. She es an outspoken critic of Israel's policies and treatment of Palestinians. The event is Free and open to the public