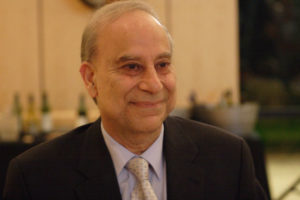 Free to the public.

Join us for an interesting and informative evening with Ambassador Ahmed, the Ibn Khaldun Chair of Islamic Studies at American University in Washington, DC and former Pakistani High Commissioner to UK and Ireland. Named “the world’s most influential authority on contemporary Islam” by BBC, Dr. Ahmed serves on the World Faiths Development Dialogue, led by Lord George Carey, former Archbishop of Canterbury, and the Advisory Board for The Senator George J. Mitchell Institute for Global Peace, Security and Justice, Queen’s University. Belfast. Author of over 20 books, including: Journey into America: The Challenge of Islam; The Thistle & the Drone: How America's War on Terror Became a Global War on Tribal Islam; and Journey into Europe: Islam, Immigration, & Identity. Recipient of numerous awards, including the Government of Pakistan’s Star of Excellence and the Gandhi Center Peace Award.