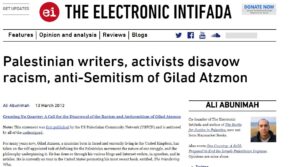 Ali Abunimah is one of the most prominent Palestinian-American voices covering the Middle East, and particularly the Palestine-Israel conflict. A journalist, Ali is co-founder of the Electronic Intifada news website, with other reporters throughout the US, Europe, and in Palestine and Israel. He was Vice-President of the Board for the Arab-American Action Network, a frequent commentator on PBS, CNN, MSNBC, and author of, among others, The Battle for Justice in Palestine (2014).